We recently received an e-mail from a relative of a prankster named Matt, who’s already read our book. As if that wasn’t enough, Matt had created his own Terrible Two board game! We were so blown away that we had to get in touch with Matt, himself, and get the backstory.

Here’s a brief interview with the creator of the coolest board game we’ve ever seen in our lives ... 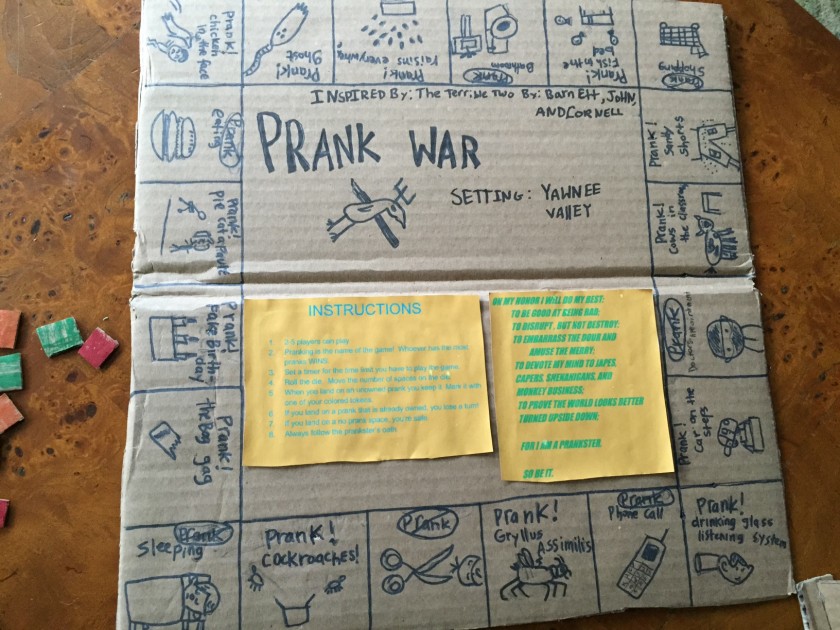 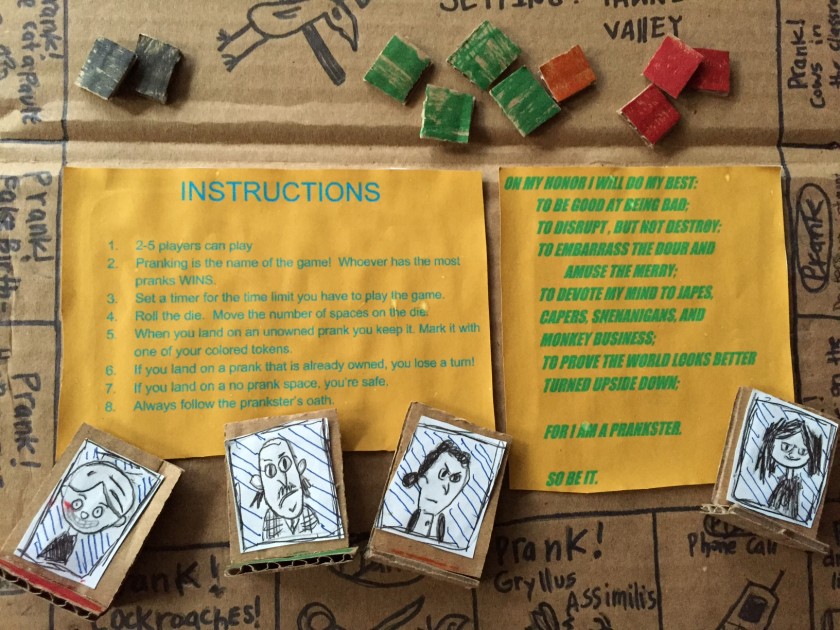 Please describe your board game.
It looks like Monopoly, but the squares are “pranks” and “no-prank zones.” If you land on a prank square, first, you win the prank. Everyone who lands on it, next, loses a turn. The goal is to be the biggest prankster.

How did you make the Terrible Two game? What was your process?
I used an old cardboard box, pencil, Sharpies and a glue gun. I wrote down all the different pranks, and came up with some of my own to have more squares. I thought of times when you can’t prank, and they were the squares that were “no-prank zones.”

Before I did anything else, I drew the characters to be the pieces of the game.

Have you invited friends or family to play your game?
Yes, I did it for a project for school. My entire fourth grade class played the game and they loved it. When our teacher said that we were going to play the game, they were really excited.

Have you ever made a board game before this?
Yes, I made one with my grandma and my cousin. It was our own version of Clue. We called it Clue 2. The characters were named things like Mr. Cucumber. The weapons included a sponge, a lifesaver, and a fire hose. The rooms were a gym, and a pool, and other stuff like that.

Has a book ever inspired you to make something before?
When I read The Lightning Thief, it inspired me to write my own book called Peter Scholtz and the Heaven Crystal.

So, how often do you play the Terrible Two board game?
I rarely play the game now, but I want to teach it to the rest of my family soon.

Which character did you relate to most in The Terrible Two?
My favorite character is Niles because he is very creative and intelligent. [SPOILER ALERT] I was surprised when he made his own pie-catapult. I would never waste pie like that.

Do you pull many pranks, yourself?
Once in a while on my little sisters. One time I took a GoGo squeeZ [“All natural healthy snacks on the go!”], and I ate the apple sauce and filled it with water. My sisters got a surprise.

How did you come up with the pranks for the board game that weren’t in our book?
I’m a natural prankster. No offense.